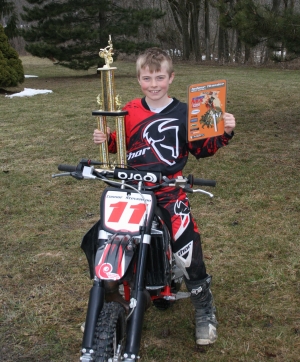 “I had a lot of fun this year and the competition was awesome. Sterling [Lofthouse] and I went bar-to-bar all season long. Playing hockey for Milton and making it to the OMHA Finals, I didn’t get much chance to practice motocross this winter because we were always on the ice,” comments Stevenson. “We did get down to the U.S. on March Break and coach Chris [Pomeroy] helped me so I could finish the season strong. Jeff Ward from Ward Motorsports and Justin Masciangelo of MMX Powersports really helped me with my bike. I want to thank both of them.”

Stevenson has enjoyed significant success in this series having won the 50cc Beginner, 50cc Advanced (two times), and now the 65cc class for two consecutive years. When asked, what his secret to success is, Stevenson replied, “My dad and I have three rules for racing; 1) Stay on two wheels, 2) Go fast, and 3) Have Fun. When I can do all three, I’ve got a good shot at winning.”

Stevenson will now be focusing his energy on the 2013 CMRC Canadian National Championships held in Walton, Ontario this August – where he’ll go head-to-head with the best in Canada and the United States. Having placed in the top three in the 50cc class, Connor has a strong chance at placing amongst the country’s elite motocross racers.

According to Connor’s father, Craig, “We’re very excited about the upcoming season, and would like to thank some very important people who have helped Connor achieve his success. Darcy from Halton Power Equipment has been a great supporter of Connor’s racing; as well as MMX Powersports, Ward Motosports, Cobra Minicycles Canada, Race Tech Suspension and ACTIONETIX™. We’re thankful for all of their support and encouragement because it can be a tough sport for kids this age.”