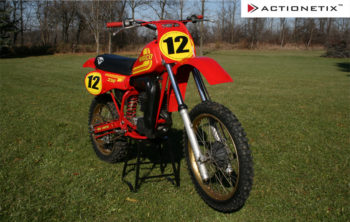 A number of years ago when a good friend of mine wanted to get into riding dirt bikes with me at our private track. I was riding a new fuel injected CRF 450 at the time, so I was pretty high on the modern technology and all it had to offer. At work one day my friend Maurice walked into my office (he owned the business I worked for) and said, “I think I’m going to buy a Maico to ride at the track.” My first response to him was, “What the hell’s a Maico?” He quickly jousted, “It’s this really cool German bike that was at the top of the food chain in the late 70s and early 80s – it was the meanest bike on the planet.”  I then said to him, “Ok, that that sounds great,” and quietly went back to my work. The little voice in my head however was literally laughing at the fact that he was going to eat sooo much roost at the track riding an old bike that he’s eventually have to tap out and yell UNCLE in front of the rest of us four stroke enthusiasts.

About a week went by and I just couldn’t help but to do a quick Internet search on this old brand my friend was so excited about. I hit the keyboard not knowing what to expect from my search. Then the first image that came up was a 1981 Maico 490… 490, now they had my attention. At first glance, the bike did look ‘pretty bad ass,’ and as I looked further at close-up images it certainly peaked my interest. Maico had some progressive styling, especially in the late 70’s and early 80s – it had bloodlines of modern bikes, but the simplicity of an era lost in time.

Fast forward a few weeks, and we were on our way to pick up a ‘slightly used’ 1982 Maico Alpha 1 250. When it arrived, I have to say that I quickly fell back into the lure of modern bikes. The Maico red was dull and faded, the air fins on the cylinder were chipped, the front tire was flat and the foot pegs looked like they were off of some kids’ toy. Nevertheless, when we got back to my place, Maurice was determined to take it for a spin, so we pumped up the tire, and opened the petcock and to our surprise the bike fired within the first few kicks. So we loaded it back in the truck beside my 450 and off we went to go riding. My single piece of advice to Maurice as we approached the track was to, “Toot around on it and roll the jumps,” because we just didn’t know what was wrong with the bike.

Thirty minutes later and we were unloaded and fired up. I put down a couple of warm-up laps to get in the groove, and Maurice was tinkering with his new to him bike. I picked up the pace on the track and put down a couple hot laps when he joined me, only to come around on my third lap and see a pile of red metal and plastic and a ball of a man who had been ejected off the bike. I quickly pieced together that this beloved Maico had bucked off its new owner and the situation might not be all that good. We took our time and got Maurice settled as he had some paralysis in his leg (which slowly came back to a point) and then loaded him in the truck for the journey home. I won’t get into the forthcoming details on Maurice’s health as it is a long story that included surgery, but suffice it to say he’s up and functioning great to this day.

When Maurice was on the mend, we kept the Maico in the ACTIONETIX shop and it sat there for a couple of years before I finally realized that if this bike was restored to its original glory it would have some real pulling power to attract people to ACTIONETIX trailer and displays and help me promote my new company – so I set out to, ‘restore me a Maico’.

Thankfully in our world today, we have the luxury of digital cameras. Taking a number of close-up shots so that I would remember how this bike goes together was the first step. Because owner manuals and other technical data are not readily available, I needed to document this before I started the tear down. With the better part of 50 images on the memory card it was time to strip the beast down to the frame. This took all of about 4 hours as I labeled and organized parts for a later time as it was my goal to use as many original parts as possible in the rebuild. 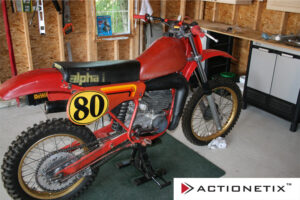 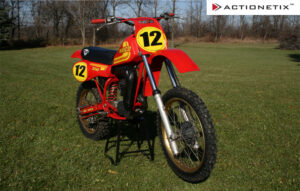 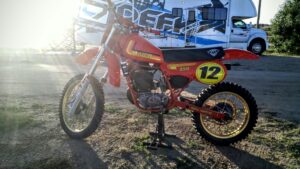 Phase two was cleaning and prepping useable parts for a later reassembly. I prepped the frame and all other parts that were to go out to powder coating and shipped them all of to Jeff Ward to get the job done. During this process, I was searching for an expert that could help me understand and manage the overall project, and I found probably the most knowledgeable Maico expert to walk the planet – John Caldwell.

John’s website is www.maicomotorcycles.com and through this entire process, I was not able to stump him on any technical question – he’s a walking encyclopedia to say the least.  John also became my parts dealer for the project and had probably 90% of my inventory needs in stock, which made this project relatively smooth and quick.

The two biggest issues with this bike that I could identify were definitely; 1) the rear suspension and 2) ensuring the internal mechanics of the motor were all in good shape. I had enlisted Justin Masciangelo to help me with the front suspension and motor rebuild. Justin has done a lot of work on my son Connor’s bikes over the years and had proven himself as a meticulous, worthy mechanic, so he became an obvious choice to enlist on the team. He did a complete teardown and rebuild of the motor, which in the end started on the third kick! He also rebuilt the front forks back to original. The interesting thing is that these forks are actually pneumatic, not unlike what manufacturers are converting to today – what goes around comes around! In the end, the front suspension came out beautifully and has worked like a charm on every ride.

The final challenge of finding a mono-shock replacement for the original Corte & Coso that came with the bike was going to be a monumental task. You can’t rebuild these shocks, and trust me there are no good used ones out there for the taking. So I approached www.RaceTech.com because I had heard they were doing a lot of work with vintage bikes as well. Sure enough they had a new G3-S line of equipment for the vintage rider and they had actually just finished production on one for a 1982 Maico. Well, needless to say I jumped on the opportunity to add a new shock to the bike.

I put my order in and gave them my height, weight, riding ability (or lack thereof) and any other info they needed to build it custom to me. I think it was 6 weeks or so later and my new baby had arrived at my doorstep. I pulled the shock out of the box and within 2 minutes had it slid in and secured – it fit perfectly! This was a true blessing that will for sure increase the popularity of the 1982 mono shock Maicos.

During the reassembly process, I was amazed at the fact there is an ‘order of assembly’ on a bike that so much space in the frame. I had to put parts in and then take them out to let other parts in –  the process of assembly and removal of parts multiple times was my life every night after work. It was a month of spare hours at night fitting this beast back together – but what fun it was…

Fast forward to the end of the summer when I finally decided to race it on a track called GullyMor. This track has a lot of GP elements to it with only a couple of man-made jumps, so it was perfect for me. Since I had not raced 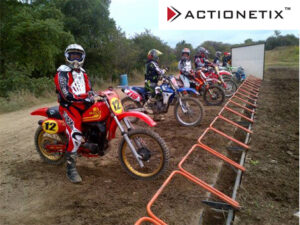 for three years due to a shoulder reconstruction, I decided to race this in 40+ class where I hoped the guys may cut me a break and not roost me too bad as they passed me. Well I’m here to say that I made a triumphant return to racing onboard a bike that I never had any intention of owning or riding in my lifetime. And what a feeling it was, I had restored a piece of motorsports history and had the biggest smile on my face that you can imaging under my FOX helmet… it was something that I will never forget as long as I’m of sane mind!

So my advice to you all now is to take some time when you’re at the races and have a look at some of these vintage and heritage bikes; ask questions, make observations, but most of all appreciate where the sport we all love has come from. This whole vintage thing is pretty cool, you just don’t know it until you actually look – like I did.

Craig Stevenson is the Founder and CEO of ACTIONETIX, which develops cutting-edge sports supplements to improve the performance of action sports athletes. www.ACTIONETIX.com