How Villopoto Does it… 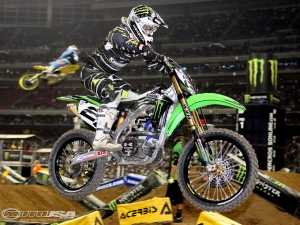 Becoming a pro motocross racer is one thing, being a top 10 finisher at an AMA Supercross race is another. Winning four Monster energy Supercross Championships in a row… well that’s a whole other level. Last night one man carved his name in the history book forever as one of the GREATEST athletes to ever throw his leg over a motocross bike. Yes – Ryan Villopoto won his fourth (you heard me – fourth) Championship in a row! The question that most want to understand in how? How has he avoided injury, maintained elite-level fitness and mental tenacity that is almost unparalleled?

Let’s start back a few years as Ryan moved up from the 250 class to the big bikes. Ryan was always considered a premier Lites rider, winning in the 250 class on a regular basis. For many however he did not look like a typical athlete. Drawing parallel lines to the great Rickey Charmichael, Ryan was considered over weight and out of shape. He had all the talent, but not the work ethic.

That all changed when he made a conscious decision to change the way he approached the sport. He employed one of the most notable trainers in the sport to help not only transform his body… but his mind as well. Not only did a physical transformation occur, but there seemed to be a notable mental transformation as well. You could observe a certian change in discipline and routine even as an outsider to Ryan’s inner circle. He became leaner, his cheeks more gaunt – you knew he was serious about becoming an athlete in this sometimes unforgiving sport.

To coincide with Ryan’s personal transformation, the Monster Energy Kawasaki team seemed to rarely miss a beat. Few if any mechanical failures happened, and the bike always seemed to be “dialed in”. Rarely if ever would you see Ryan’s bike jumping around over the woops, washing out in corners or not starting on the line… it was clear that the Kawasaki team has also been at the peak of their game as Ryan improved his. In essence they were working as an integrated unit, as a well-oiled team.

It takes so much more than a talented rider to survive 68 Supercross races that garner four consecutive championships. It takes unparalleled preparation, communication, practice and an unwavering “can do” attitude (oh yeah and a little money to get this team to and from the races). So with this, we salute Ryan Vilopoto and the whole Monster Energy Kawasaki team on a world-class winning streak.

Some may call it a Dynasty…