The Perils of Racing 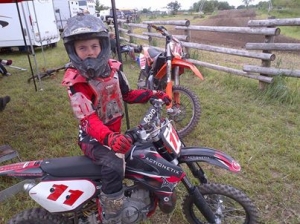 Yesterday was bittersweet. Our son’s 2013 Cobra 65cc was stolen right outside our trailer while we were sleeping at a Maguire’s (MMRS) race at Lindsay Fairgrounds. Unbelievably, it was hidden underneath his 80 bike, both leaning up against our trailer, and the thieves moved the big bike to get at it because they obviously knew what they wanted. Supposedly there are only 2 of these particular models in Ontario, and these punks knew we were there.

However this blog isn’t meant to turn this past weekend into a bad memory – because everyone at the MMRS + CMX race was amazing and supportive. Lots of members offered for Connor to ride their extra 65 and word is spreading across the motocross industry very quickly – especially since the Nationals are in only 3 weeks. We need that bike back! So please, if you know or hear anything make sure to contact us asap. We’re offering a $1000 reward.

Nonetheless, Connor rose above the crime and was hell-bent determined to race in the 65 class on his 50 bike instead. He’s no quitter and I can’t express how proud I am of him. He’s only 8, but is maturing as an unbelievable rate. When he found out the news, he cried of course (and this killed me inside as a mother), but he was quick to ask his dad if he could race his 50 against the 65’s. And the rest of the day he turned his frustration into kicking some butt on the track.

He raced in the 65s in the older age group (10-11) taking 3rd and 5th in the moto’s, but placed 2nd overall in the east-coast shoot out; and made the top of the box with 1st in the 50s for the day (which led him to win the 50s overall). He’s such a trooper and I’m so proud. Sometimes it just blows me away how much we can learn from our kids. They’re amazing in every single way.

Let us know if you find that bike!