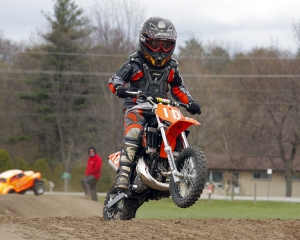 Riding in the U.S. is much different than in Canada. For one, the entry prices are a lot higher which often becomes a deciding factor as to how many times we travel south in the season. There are also a lot more kids at the starting gate (sometimes up to 50 even at a smaller race) whereas at home we usually see about 15 to 20 out every weekend in each class. The facilities also seem to have more amenities for campers, more fans, bigger trailers and motorhomes, and even bigger trophies (isn’t everything bigger in the States?). Well, maybe. But that doesn’t mean the Canadian racing series isn’t fierce with action and totally dedicated to racing families.

So what’s a typical race weekend like across the border? Well, it’s great for the kids to experience different tracks and meet new friends. But the reality for parents is that traveling for any competitive sport is costly – and it’s no different for motocross. However it’s always great to expand a rider’s athletic competition.

A Look Back: I remember practice day at Area 51 Moto Speedway in Batavia, New York. I was so glad we made it across the border for the full day of practice because the next day was Connor’s first time on a big track racing his 50. This was going to be a big step up for him compared to the Canadian dirt we’re used to.

Nonetheless, Con’s first time on the big track went well – despite some really deep ruts and kids dropping around him at every corner, but he managed to keep it on two wheels. Rule number one. He came off the track with a bit of a shell-shock look on his face – probably because it was a lot colder than we anticipated and his hands were freezing (or maybe because he was overwhelmed by all the excitement) but either way he held his own with the 65 riders. Next was the 65cc practice (still on his 50) but he seemed to garner more speed as this bike could hold better to the big drops and make it through the ruts. We were looking forward to seeing what would happen at the race the next day.

It was 5pm in Batavia and we were ready to barbeque dinner. All the campers were equipped and very high-tech. We had a pull trailer because we hadn’t graduated to a toy hauler yet. We left the dog at home this time to make things easier getting across. Craig set up the beds, Con headed straight to the peewee track for a few rec laps while the sun was still out, and Brock was playing on the grass with his new toy dirt bike. Ahhhh, a typical race weekend no matter what country.

The best is still yet to come,